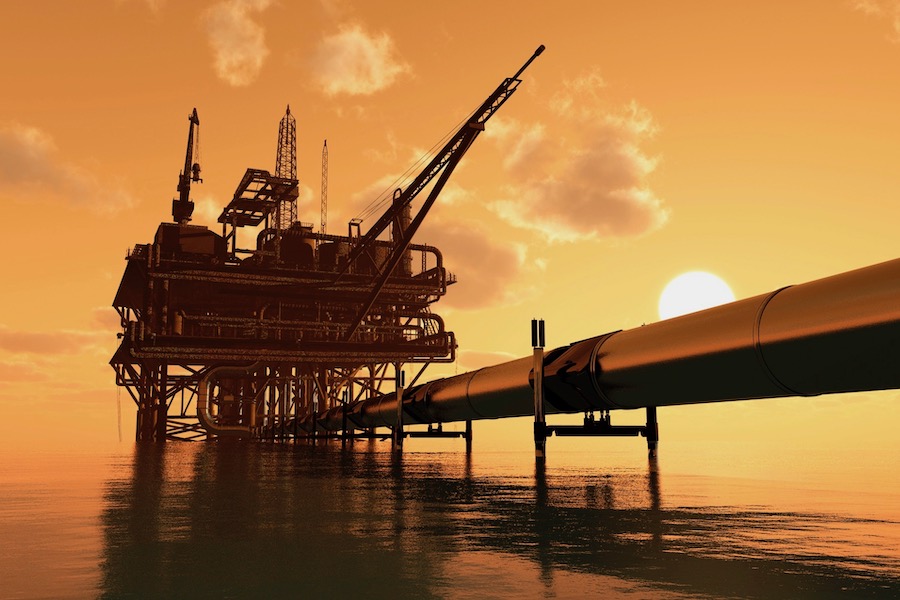 Oil and gas production is a fundamental cornerstone to the global economy. The world consumes close to 100 million barrels of crude oil every day, and the number is set to continue rising despite the expansion of renewable energy. In short, oil will continue to be an essential primary source of energy for the foreseeable future. Here is how energy companies find it and extract it.

Oil and gas get formed when hydrogen and carbon atoms in plant and animal remains connect in geological formations.  It happens under the growing weight of sand and other sediments that accumulate on top of the remains over millions of years. With time these accumulations hardened and became rock.

That rock, in layers of different density, or strata, moved over these millions of years driven by tectonic movement. This movement created pockets of oil and gas trapped in porous rocks sandwiched between harder layers. Identifying such sandwich-like structures that contain so-called oil traps is the first step in oil exploration. The second is conducting seismic surveys of the area.

When sound waves penetrate rock formations, part of their energy gets reflected by the harder layers of rock, while the rest continues deeper into other strata. The reflected energy travels back and is recorded and then interpreted.

The industry differentiates between 2D and 3D seismic surveying. The difference between the two comes down to the number of seismic lines used to derive data about potential reservoirs. Seismic lines are the lines of geophones—the devices that receive the sonic signal reflected from the layers of rock—arranged in the surveyed area. The more geophones there are, the better the data. Also, in 3D surveying, the geophones are more closely-spaced to capture more detailed data.

Based on how much energy from the sound waves gets reflected, (and where), explorers identify potential oil and gas-bearing strata. The next step is exploratory drilling. Time to spud the wildcats as drillers call these wells.

If the drillers strike oil in the well, the next step is to measure flow rates and pressure, which would tell the company if the well is viable and worth the additional investment for appraisal wells.

Appraisal wells are drilled around the first exploration well in case the flow of oil from the first well suggests there are enough hydrocarbons to justify developing the field. The purpose of the appraisal wells is to quantify the reserves of the oil field. Also, they enable the drilling team to examine the quality of the hydrocarbons contained there.

Another thing appraisal wells tell drillers is how much oil they can reasonably expect to produce from the field. This information would inform other decisions afterwards, chief among them how to best approach extraction to recover most of the identified and quantified reserves. The number of production wells, their location in the field, the drilling and launch schedule are all determined thanks to the data collected and analysed during the appraisal drilling stage.

Drilling an exploration or an appraisal well and turning the latter into a production well is pretty straightforward on land. Once the well gets drilled and the presence of oil and gas confirmed, drillers remove the drillbit, add production tubing, and the oil begins flowing. The rig is dismantled and moved to another location.

Offshore, however, everything depends on depth. For shallow water exploration, a drilling barge with a rig attached to it is sufficient. In depths of up to 500 feet, drillers use jack-up rigs, which are a type of mobile offshore drilling units (MODUs). Jackup rigs are attached to the seafloor, and the drilling rig is “jacked up” above the surface.

Further out into the sea, at depths of up to 10,000 feet, E&Ps use semi-submersible platforms. These are floating MODUs that feature pontoon-like “legs” underwater, hence the name. These legs make semi-submersibles more stable than drillships—the vessels used in deepwater exploration.

Another kind of vessel used in deepwater and ultra-deepwater offshore exploration and production is the floating production, storage and offloading vessel, or the FPSO. FPSOs look like ships, and they accommodate processing equipment and storage space. The oil and gas extracted on-site and processed on the FPSO are either loaded on smaller vessels to take to shore or fed into pipelines.

Once the drilling rig has done its job, commercial production begins. Onshore, the process from exploration to production start takes a lot less time than offshore. Putting a shale oil well into production takes a few months, making shale the fastest deposit to develop, at least in the United States. Offshore projects, on the other hand, still take years between discovery and the start of production. This slow process is both because of the much more challenging maritime environment and because of safety concerns. These were heightened after the Deepwater Horizon disaster and have remained elevated since then.

Initial production of oil and gas from a conventional well, onshore or offshore, has traditionally relied on the underground pressure of the hydrocarbon reservoir, which pushes up both the oil and the gas. Primary production is called free flow.

The underground pressure of oil and gas deposits quickly declines and E&Ps need to help the oil keep flowing by injecting either gas or water into the well to boost the pressure of the reservoir. Increasingly often, gas, steam and water injection are moved back to the start of a production well’s life to maximise initial recovery.

Free flow—primary production—can recover a relatively small portion of a well’s reserves. Different sources put this at between 5% and 25%. Secondary recovery, commonly called enhanced oil recovery, features water, steam, and gas injection. It can increase recovery rates substantially, bringing the total to 40% of the oil in the deposit. EOR’s main drawbacks are that it is both expensive and uncertain. There is no guarantee the injection of fluids or gas would increase recovery enough to justify the expenses.

Oil sands are a special kind of oil deposits. They are so special that they require unique technologies to recover the solid-state bitumen. About 80% of oil sands get mined in-situ, on-site. The most popular technique for bitumen recovery is called steam-assisted gravity drainage, and it involves drilling two horizontal, parallel wells in the bitumen layer. Producers then inject steam into the top well to melt the bitumen around. Gravity makes this bitumen flow into the lower well and from it, up to the ground.

Shale oil differs from the conventional oil in that there is no pool of oil that drillers tap into. The oil in shale formations is trapped in the rock, and E&P companies drill directly into that. The initial drilling is vertical, like in a conventional field. From this borehole, horizontal laterals are drilled to maximise the amount of oil recovered.

After the well gets drilled, E&Ps inject water into it to release the oil from the rock: the notorious hydraulic fracturing or fracking. Besides water, drillers also inject chemicals into the rock and sand, to keep the rock pores that contain the oil open for longer and recover more oil. Shale oil wells are much quicker to start producing, and depletion also comes more quickly than in conventional oil wells.

Every well that has stopped yielding enough oil and gas to make economic sense needs to get plugged so as not to contaminate underground aquifers or leak above ground. First, there are tests to make sure there are no cracks in the well casing that could cause leaks. Then the operator of the well plugs it with cement and removes the surface structures used in production.

Offshore, in addition to the plugging of the depleted wells, E&Ps need to decommission the platforms that have housed the production and storage equipment. Decommissioning involves dismantling the equipment and related infrastructure (pipelines), and removing the platform – or at least most of it – from its location.