BP scores a win off the Digital Oilfield Dave Messlerhttp://www.acmefluidstraining.com
Dave Messler is an oilfield veteran with 38-years of experience in the industry. He is currently a Senior Trainer at ACME Fluids Training, a small organization that focuses on teaching the development of reservoir drill-in fluids (RDF’s) to the industry.

You may have missed this, but last month BP announced that a new field had been discovered in their Thunderhorse field. This is welcome news as the original T-Horse reservoirs are undergoing secondary recovery methods as production has declined. Thunderhorse produces from reservoirs buried more than 28,000′ BML. This new one is deeper still from a well that went 35,000′ BML. New oil horizons in the GoM seem to be regularly found by this operator. How did they do it?

Shale has sucked all the O2 out of the room in recent times. This new announcement by BP and credited to their analysts at their Houston, Tx Center for High-Performance Computing, processing data from a 2018 exploration well in a matter of weeks, could change that narrative in the coming year. New billion barrel fields are not commonly found anymore, and the ones that are found are much harder to find than in years past. Particularly ones that are “advantaged,” as defined by BP’s Chief of Upstream, Bernard Looney.

In upstream the business is focused on growing both gas and advantaged oil – focusing on only those resources that are low cost or high margin – to be resilient to any price environment.

The ability to turn around data like this within a time frame of a few weeks, rather than the year or more it might have taken another company is a real competitive advantage for BP.

Here is how it’s done in part.

The Houston data center also constructs “digital rocks,” which are high-resolution 3D images of real geological features that reveal highly detailed Petrophysical properties. For example, BP is able to determine the shape and location of embedded pores in the rocks so BP can produce oil in a safe, effective and environmentally sound manner.

Exhaustively testing a physical rock with 20th-century fluid methods used to take up to half a year. But by collecting samples of rock and extrapolating their properties, a more accurate picture of the structure can be determined in a fraction of the time. BP petrophysicists take field samples and bombard them with x-rays, creating an image of every microscopic slice of the rock. They transmit all the data to the supercomputer, which transforms it into actionable images employing custom-designed software.

In terms of advantage, consider this. BP just picked up a billion barrels of new oil without:

In the Q-4 conference call, Bernard Looney mentioned that at least two new GoM FIDs could be expected this year.

I would expect two to three expansion projects to come at Thunder Horse. I’d expect to see the first one being sanctioned this year. And I think I would say from a development cost per barrel perspective, we’re continuing to drive it down. In our overall portfolio, our cost per barrel is down by 20% over the last couple of years. Expect to see the first expansion project at the Thunder Horse later this year.

That is a definite digital advantage for BP.

BP’s valuation against other Super Majors

BP generated $12.7 bn in net profit for 2018 and currently trades for about 11X that amount. It’s hard to make comparisons between Super Major oil companies, but compare we must since this is a financial article. Let’s look at the PEG-Price to Earnings Growth ratios for a few of the commonly compared competitors for your investing dollars. 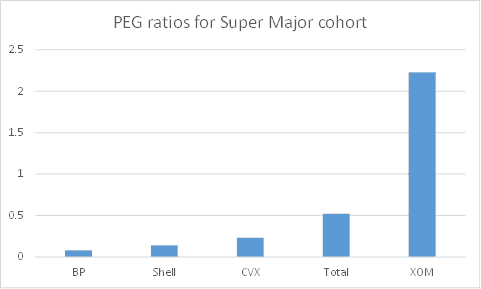 You can see from the PEG ratio that BP is undervalued by the investing community. Currently, it is a very affordable ~$42 a share. If you wanted to buy Shell (NYSE: RDS.A) (NYSE: RDS.B) it would cost in the $60s. Exxon Mobil (NYSE: XOM) is in the mid $70s. Chevron (NYSE: CVX) is over $100 a share. I am not arguing against any of those companies as an investment; they are all great, but since we are doing comparisons, they cost more per unit of earnings growth than BP.

The risk is oil prices, not to the profitability of the company mind you, within the range they forecast, but rather the equity price in relation to crude. As we know though, crude prices can be a cruel mistress.

The Direction for Oil?

People often ask me in replies to articles concerning the oil patch, why oil fluctuates so wildly. I think a lot of people invest in names they’ve become familiar with, without doing the “due diligence” that prudent investing requires.

Here’s what I tell my subscribers about the current swings in price.

No investment in oil-related securities can be wisely considered without putting it in the larger framework for expectations for oil.

There are three key drivers for the oil market presently.

The rhetoric coming out of Washington and Tehran is pretty strident currently. The downing of the U.S. drone brought the world very close to a cataclysmic event, a wider war between the U.S. and Iran. Thankfully President Trump listed to his more dovish advisers and called off the retaliatory strike.

I have to agree with the President’s reasoning and applaud his craftiness in not taking this step. There was no appetite for this strike broadly in the country, and he would have been excoriated in the press when news of the deaths of the Iranian troops made the rounds. Killing a few Iranian Revolutionary Guard Corps, IRGC commandos would do nothing to further our core interests-stopping Iran’s nuclear program and would have likely been met with a response from the IRGC. The U.S. would of course then had to take out another missile battery, or some such, and we’d have been off to the races figuratively speaking. Wars are much easier to start than to stop. If the last 20 years has taught America anything, it should be that.

Attacking the American drone was a desperation step by Iran’s ruling theocracy to entrap it into retaliating. Now, giving them a pass on knocking this drone out of the sky, America assumes the “moral high ground” in a press for “negotiations.” Negotiations that their population may “demand” of their leaders. Make no mistake, sanctions are having a profound effect on the average Iranian’s life.

Things are hard in Iran now, the U.S. re-imposition of sanctions is having a real effect on their economy. The graphic below suggests that Iran’s economy is actually shrinking. That means in spite of a growing population the country’s economic output is falling. This is the very definition of hardship on a personal level. 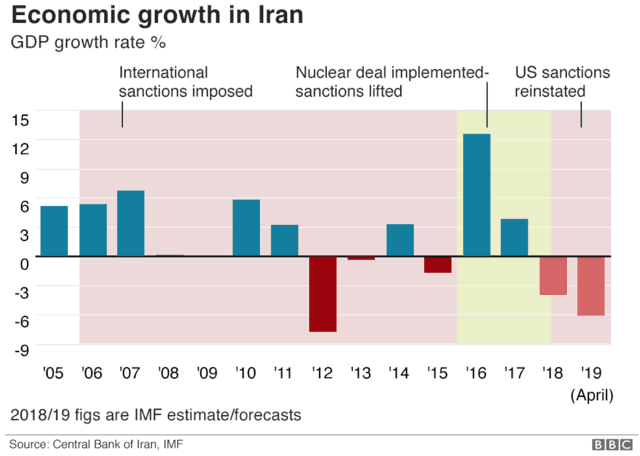 If you’re an average Iranian, it means your money is worthless, the Iranian Rial has lost 60% of its value YoY. It means there are fewer goods and services you can afford to buy, inflation is over 30% YoY. It means if you’re a new graduate, looking for a job, there are no jobs to be had. Iran’s youth unemployment is approaching 27%, and new graduates nearing 40%.

This is an untenable situation that cannot persist for very long. People will demand change. And, that, of course, is the ruling theocracy’s deepest fear. Because when change comes from within, (as real change surely must), it has much more profound and permanent results, than when it is forced from external sources. It’s how the theocracy took control of this country in the first place, now so many years ago.

Given the three factors discussed so far, I expect the most recent backdrop for oil of oversupply/under-demand worries will shortly resume its dominance. Inventories have been building for most of this half year, and the world is consumed by the trade spat with China. Until we get some kind of deal regarding trade with the Chinese, I don’t see a positive catalyst long term catalyst for oil.

While the indicators this week are bullish for crude, I do not expect a strong rebound in oil equities until there are obvious trend reversals for oil inventory growth, the global economic growth story becomes less bearish, and no war erupts with Iran.

Mr Messler also writes for Seeking Alpha, a crowd-sourced investing site. His prior articles are published under the pseudonym- Fluidsdoc.

After starting in October and November 2019… The global impact of the COVID-19 pandemic spread around the world in the first few months of 2020....
Read more
Workshops

(Written by Dave Taylor, the owner of rp², with input from Jason Lavis) A REAL Change In an industry well over 100 years old, examples of...
Read more
Cost Saving

Cost Saving through Operational Optimisation Without exception, every Operator has the potential to reduce their operational costs significantly. I don’t think anyone would argue with...
Read more
Country focus

The Oil Industry of Nigeria If anyone asks Chevron or Shell, for example,  how they feel about Nigeria, the response would probably be that they...
Read more
Oil and Gas Industry Education

Working on an offshore oil rig or platform is a unique experience Note: In this article, we'll use the word 'rig' and 'platform' almost interchangeably,...
Read more