Will Brazil Lead A Recovery In Deepwater Drilling? Dave Messlerhttp://www.acmefluidstraining.com
Dave Messler is an oilfield veteran with 38-years of experience in the industry. He is currently a Senior Trainer at ACME Fluids Training, a small organization that focuses on teaching the development of reservoir drill-in fluids (RDF’s) to the industry.

The Pre-salt arena, discovered only a decade ago, contributes an increasing share of Brazil’s daily oil production. In the graphic below, you can see that there is a steady ramp up in Pre-salt production since 2009. You can also see a slow, but steady decline in other sources. 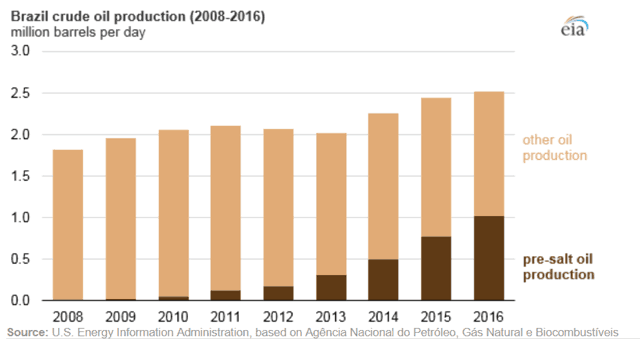 With the scandals and political strife that have become the stuff of legend in the last decade, Brazil finds it again needs external sources of capital to supply its oil requirements. In furtherance of that goal, it has been auctioning off attractive blocks, and happily pocketing the Dinheiro that the IOCs (International Oil Companies) offer up for them.

Why drill in deep water?

This is a fair question. With all the press that the American shale has received in recent years, the Deepwater arena has been neglected. Deepwater drilling has fallen by the way over the last few years, largely due to the front end cost. The rigs needed to drill in this environment were very expensive, and when added to the ancillary services used across the life of the wells, made the overall proposition uneconomic for the oil companies.

Deepwater is a necessary part of the energy basket that modern society will need to make sure that it is adequately supplied with power. To understand why it is helpful to know that not all hydrocarbon reservoirs are alike. So, to further the discussion, I will discuss the topic briefly below.

I will start by defining some terms to help you understand the points I will make below.

· Clastic. This refers to a type of petroleum reservoir comprised of detrital sediments that accumulate over time; typically sandstone. Shale is also a clastic, but its grain structure is so tightly compressed that it has little or no matrix permeability.

· Matrix permeability. This refers to the rock’s flow characteristics and is measured in Darcy units.

· Stimulate. That’s what fracking is — an attempt to massively increase the near-wellbore flow characteristics to increase production from the well.

Back to our question. Why drill in Deepwater? The short answer is that if you want big discoveries, you must drill in prolific reservoirs that are capable producing thousands of barrels per day for a long period of time, reservoirs that are typically the target of DW exploration. Part of the reason for this is that many of these DW reservoirs are clastic (sandstone) and have some matrix permeability already. What this means is that unlike most shale reservoirs, where the permeability lies in tiny, vertical fractures, sandstone reservoirs have at least some horizontal connectivity back to the well bore. When you stimulate (frack) this type of reservoir, the increase in permeability is huge, literally achieving gains of 1,000s of times. Part of the reason shale is so drilling-intensive is that it lacks that horizontal permeability. Fracking overcomes this for a while, but in the end — usually two to three years usually — Mother Nature takes over and these wells play out.

OK, that’s it for the tech stuff. If you want more you’re going to have to take a class. If you didn’t understand any of this, then I will ask you to take my word as an industry veteran — and the word of virtually every major oil company on the planet — that DW is where the big finds are.

What is the Pre-salt? It consists of oil formed from depositional activity in basins formed by the breakup of the super-continent of Gondwana 300 hundred million years ago. In modern times these deposits lie beneath a thick layer of evaporite salt and is further overlain by additional sedimentation, and of course about 6,500 feet of water.

It is a massive resource that is likely replicated to a large extent in West Africa as the graphic above reveals. In Brazil, it is estimated that the Pre-salt runs from Santa Caterina to Espirito de Santo, a distance of some 800 kilometers. It may also be as much as 200 kilometers wide.

Petrobras has drilled a number of wells in the Pre-salt and has not hit a dry hole yet (a fact which might account for the strong IOC interest in this play). This resource was originally declared so basic to Brazil’s oil independence that it was restricted to Petrobras. Over time, the capital cost to develop these fields led the ANP, the Brazilian oil regulator, to open the Pre-salt to IOCs. Which brings us to the recent auctions.

The success of this auction, Round 15 in particular, might also account for the relatively mild showing in the recent U.S. GoM auction that yielded only a $124 million for a record auction of 77K acres. By contrast, the Brazil auction net the government $2.4 billion in hard currency. In short, each auction had many of the same players, and clearly, the big money was tied up in Brazil.

Who got what in Brazil’s 15th Round? ExxonMobil (XOM) and partners were the big winners and snagged 8 blocks to add to the 10 blocks captured in the September 2017 round. Clearly, XOM who needs to start ramping up reserves replacement, and has not operated in Brazil before is on the board now. Exxon was so confident in one block, CM-789, that it paid a record $853 mm for that block alone. 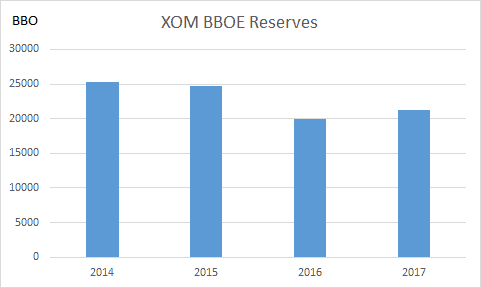 Why was Block CM-789, so special to XOM and partner Petrobras? Perhaps it was the fact that the Paleocene, turbidite depositional mechanism creates the potential for huge finds. This geology is similar to the West African structures it has tapped offshore Angola and Liberia. It has further similar acreage offshore Ghana. Perhaps they dream of a reservoir that will deliver the Erha-type performance it found offshore Nigeria- wells making twenty-thousand BOED.

Turbidite describes a depositional state characterized by a high energy environment that often yields clean, high quartz reservoirs capable of delivering wells with flow rates as high as 20-30K BOPD. These wells can produce for many years. Exxon’s interest is surely also drawn by the tantalizing proximity to some of the Pre-salts biggest finds to date, Lula. Shown above in orange. It also near another new Petrobras operated Mega-field that has just come online, Libra. Libra is shown in gray in this graphic. Libra has been estimated to contain between 8 and 12 billion barrels of recoverable oil. With reserves potential like this, XOM’s interest in block CM-789 comes into sharp focus. Note in the graphic above that this block is directly adjacent to the Pre-salt polygon, originally reserved for exclusively for Petrobras. This is a structure identified as a “lead” in the ANP Roadshow prior to the lease sale. In the paste below, you see a lot of wonderful anticlines (an upward folding of the rock, with the oldest sediments at the center) that are famous for forming stratigraphic traps for oil accumulation. The ANP has helpfully pointed out in blue what might appear to be hydrocarbon accumulations just under the salt. Was what XOM saw here worth almost a billion dollar front-end investment? Time will tell. One thing is for sure. With a billion on the table, exploration drilling will begin shortly. Even Exxon doesn’t park that kind of money for very long. I see a rig getting a contract soon.

Chevron, (CVX), picked up four new blocks. It was the first time in a number of years CVX had participated in the Brazilian play. It has other Deepwater operations in Brazil’s offshore market, key among them the Frade (FYI- “D” makes a soft “g” sound in Portuguese) project. You may recall CVX and Brazil had a bit of a dustup regarding oil leaks from shallow flows on Frade, that to senior CVX execs being slapped in jail for a weekend. There’s nothing like a night in a South American jail to cool the ardor of oil execs for a particular country. Time heals all wounds, however, and CVX is back in Carioca-land. Perhaps with a new set of execs. 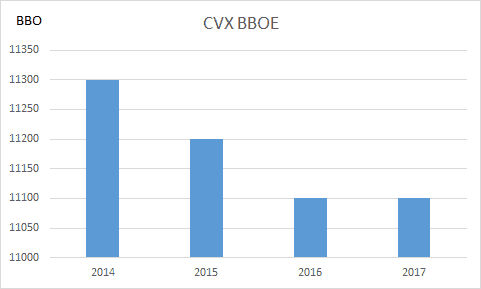 You can see that CVX has been treading water the last couple of years, with reserves being markedly down since 2014. So back to Brazil, and Deepwater exploration it came.

Shell has operated in Brazil for nearly 30-years. It has a considerable infrastructure already and is in a good position to develop the blocks it picked up in round 15. 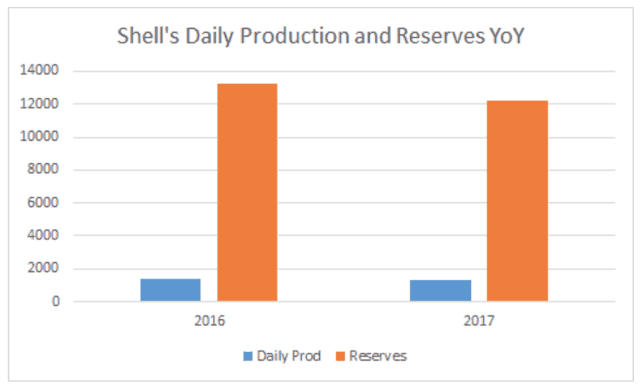 Shell picked an additional 4-blocks in round 15. Those, with the 6-blocks it picked up last Fall give it a total of 18 exploratory blocks to probe for oil and gas. It plans drilling on the highly prospective Gato do Mato (Jungle cat) block in 2019.

The Spanish oil operator could use some reserves addition as well. It has been treading water largely for the last several years. This particularly true when the recent suspension of their license in Vietnam to drill the CRD project is taken into account. 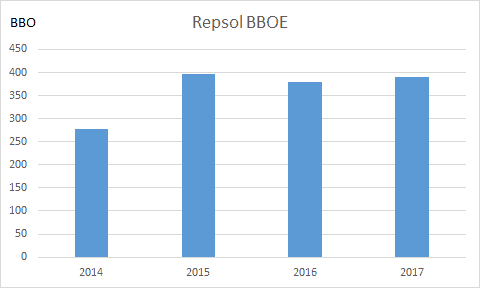 Statoil (STO), BP, and Wintershall, Division of Germany’s (OTCQX:BASFY), were all winners in this auction as well.

With billions of dollars in leases laid out, these companies are not going to be sitting on their hands. They need to replace reserves… badly. That’s the reason for the interest in the Brazilian Pre-salt. Drilling will start soon, as these companies look to start capitalizing on the huge down payments they’ve made here.

Over the next year or so we should see some DW rigs returning to service, and starting the cycle for other service providers to follow.

Dave Messler is an oil industry veteran who maintains a consulting and training practice called, ACME Fluids Training. More info can be obtained at www.acmefluidstraining.com.

In addition, he writes for a financially oriented blog site called Seeking Alpha, under the pseudonym The Fluidsdoc. There he runs a Market Place investing service known as The Daily Drilling Report. More info on this can be obtained at https://seekingalpha.com/author/fluidsdoc/articles#regular_articles.